In the land where I was born

Posted on February 2, 2014 by floricooks

Sing along! I’m sure there’s a way that I could provide a soundtrack for this post, and I am as equally sure that it would be a copyright violation like saying that I made these sandwiches as my contribution to a Super Bowl party… So let’s just say that I am going to a Superb Owl party and leave it at that. Nope, I’m not going for the game; there have been years that I didn’t even make it to the kickoff.

According to Wikipedia: Another theory suggests the submarine was brought to the U.S. by Dominic Conti (1874–1954), an Italian immigrant who came to New York in the early 1900s. He is said to have named it after seeing the recovered 1901 submarine called Fenian Ram in the Paterson Museum of New Jersey in 1918. His granddaughter has stated the following: “My grandfather came to this country circa 1895 from Montella, Italy. Around 1910, he started his grocery store, called Dominic Conti’s Grocery Store, on Mill Street in Paterson, New Jersey where he was selling the traditional Italian sandwiches. His sandwiches were made from a recipe he brought with him from Italy which consisted of a long crust roll, filled with cold cuts, topped with lettuce, tomatoes, peppers, onions, oil, vinegar, Italian herbs and spices, salt, and pepper. The sandwich started with a layer of cheese and ended with a layer of cheese (this was so the bread wouldn’t get soggy).

My story starts yesterday with an excursion to celebrate (Lunar New Year version) Sally Kemp’s triumph over stomach cancer. This is no ordinary triumph. Sally is 80 (81 on Friday) and was pretty far down the road with the cancer when it was found last year. After 2 rounds of chemo and being blasted and just about destroyed by radiation therapy her entire stomach was removed. We almost lost her a couple times (at least). Not only has she come back, she has turned into a food-obsessed eating machine. The other day I popped to find her watching a cooking show, eating

crackers and reading a British food magazine with a cookbook tucked in beside her on the chair known as Comfy. So yesterday, needing to get cold cuts to make sandwiches for today and having promised Sally that we would celebrate every new year that we could lay our hands on for a full year after she was declared cancer free right before Rosh Hashanah, we headed out for San Gabriel to go to one of LA’s best Italian delis and then get long Shanghai style noodles for lunch.

Claro’s is the size that “supermarkets” used to be before they turned into football field sized warehouses with an emphasis on processed food. They have lovely stuff, mostly imported and a first rate deli counter where you’d better have your act together when ordering. The first time I went there I asked one of the deli-men if the sausage was good. His reply was “We’ve been making it since 1948, lady. What the hell do you think?!?” That will teach me to ask stupid questions. Sally was in heaven, especially pleased with a big hunk of Parmesan that has a nice rind, which will enrich her next bread soup (sign me up for that!!).

Next stop Emperor Noodle – or as Siri calls it “Burn Doodle”. XLB and Duck Noodle with a side of Steamed Broccoli (enough fill us up and to take a bowl home to Heidi who was working and could not go along with us).  We just beat the rush. When we left I heard people behind me fighting over our now empty table.

OK – back to the Submarine. Before you scream, I intentionally switched to ciabatta, so we will call these Italian Sandwiches instead. But what’s inside is the real deal. The meat sandwich has Alpino Salami, Baked Ham, Capicola, Hot Head Cheese, Provolone, lettuce, tomato, red onion, oil and vinegar, oregano,

and olives. The veggie version omits the meats, adds fresh mozzarella, mushrooms and fried artichoke hearts. They are currently resting under a board to give them just a slight press and will be served with my home brew mustard and pepperoncini along side them. Check back later for more photos and report on the rest of the spread from the party – Cuisine of New Jersey – “All that glitters in the Garden State”. 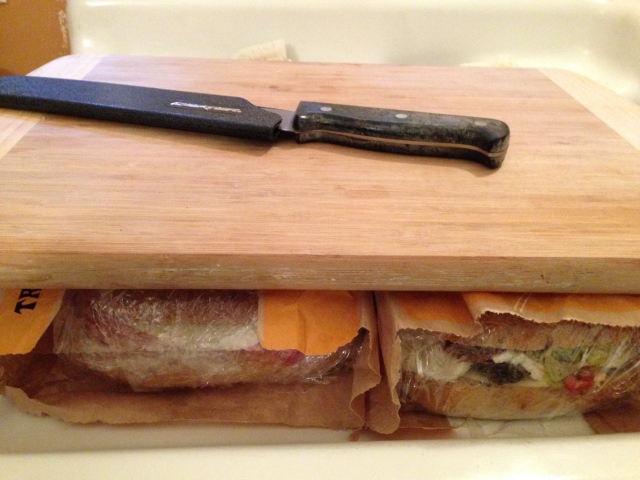 2 Responses to In the land where I was born