There’s too much food in my house…

Years back, when I lived in West Hollywood and my friend Serry wasn’t going out one New Years Eve she invited me to stop by. I found a buffet spread (beautifully) crammed with every extravagance imaginable – oysters, Serrano ham, fabulous cheeses, fine wine and champagne – all for a snack… I asked how many people she was expecting and she said no one else. BUT – just in case anyone dropped by she wanted to be able to welcome them on NYE with abundance and that would usher in a year of the same.

I went to the Hollywood farmers market yesterday. This is one of LA’s oldest and best – right after Santa Monica’s Wednesday market which is just too far to go unless I have other reason to be on that side of town. In normal weekday traffic Hollywood can be a real schlep, but on Sunday at 8 AM I fly there in under 20 minutes. [Ask anyone who has lived in LA for a long time and they will tell you that there was a time when you could get anywhere in 20 minutes or less] My friend Jorge who grows citrus and avocados in the desert says I am like a comet; I come to the market once a year like clockwork. I go every couple of months really. I came home with three kinds of greens, purple Brussels sprouts, butternut squash, some of Jorge’s grapefruit, a few pounds of Yukon gold potatoes, half a pound of goat cheese, some smoked salmon, a can of Russian salmon caviar, an organic free-range chicken, along with the only edible winter tomatoes in sight and Persian cucumbers for Israeli (Arabic) salad. I did not get anything from the “tide-pool” however tempting that was… 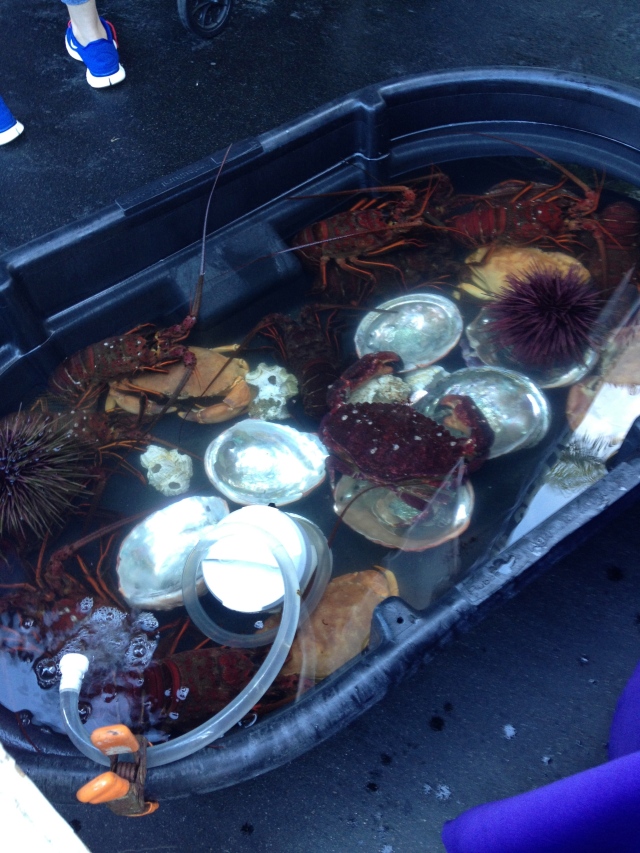 I already had about 2 cups of cauliflower roasted with Raz El Ranout in the refrigerator, so here’s the rundown on Roasted Cauliflower and Potato Soup:

Here are MOST of the ingredients:

Start with a basic mirepoix and sweat until soft in good olive oil. Add about a quart of water, about a teaspoon of salt, a few grinds of white or black pepper, the peeled and cubed potato, the bay leaves and parsley stems (the leaves will go in when the soup is done). At this point I decided that some thyme and dill sounded good too. Bring to a boil and reduce heat to a simmer. When the potatoes are soft, turn off the heat, blend until pretty smooth with an immersion blender and add the finely chopped cauliflower and minced parsley leaves. Correct the seasoning and serve. All but about a cup of the soup fit back into that beautiful German canning jar to go into the refrigerator.

That extra cup made a good morning snack.

The rest of the potatoes will be used along with the goat cheese to make galettes (OK, fancy latkes), which I will serve tonight with the smoked salmon and caviar to whomever happens to drop by. Serry taught me how to start the year right.