I’ve been less than diligent about posting lately and I have a bit of a back up of material especially in light of the holidays. I’ll try to get caught up this weekend. 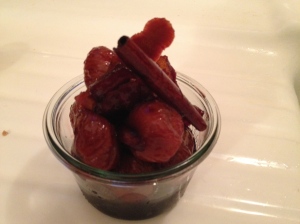 On Christmas day some friends and I decided to change the usual Jewish tradition of a movie and Chinese food. We didn’t change it too much though; after all tradition is a good thing.

We met early and went for an early (but not the crazy-early 8:15 showing) of Les Misérables. After the movie we went back to David’s for a meal that he and I had been talking and planning for weeks. 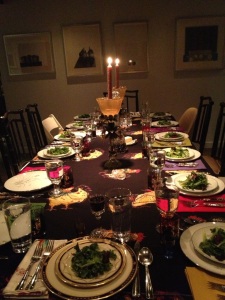 As is always the case with him, the table was set and STUNNING! We started with cocktails and wine and cheeses – many cheeses, my home cured olives, spinach spread and a thorough critique of the film. I loved the innkeepers (Helena Bonham Carter and Sasha Baron Cohen) and what I thought were a couple of nice Python-esque touches – “Who’s there?” “The French Revolution!” Really? Who were you expecting? And, who knew Russell Crowe could sing? Well, don’t worry; he really can’t. But he CAN sell a song with the best of them.

Dinner was fab – a simple green salad followed by baked escargot. The main was Boeuf Bourguignon, Ratatouille, Potatoes au Gratin, French Green Beans with Peppers and Olives. Dessert – now we’re talking! – Sherman made a yummy Tart Tartin and I made Figs Poached in Port with Orange, Ginger, Cinnamon, Cloves and Black Pepper. We served the two together along with a good runny Camembert and for contrast a hunk of Bulgarian Kashkeval. Today at the local mid-eastern market I picked up a carton of Persian pistachio saffron ice cream; I think it will go equally well.

A fine time was had by all!