I don’t remember where I read about this last year the day after Passover when it was too late, but I’m sure glad that I remembered in time this year! This is supper easy, everyone loved it, it caused quite a fit of giggling all around the table last night and will become a part of my Seder going forward. As if the four glasses of wine are not enough let’s throw in a shot of vodka too! 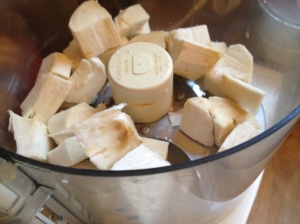 Peel and cut about half a large horseradish root into chunks and put it in the blender or food processor with at least a cup of vodka. After making it in the food processor I would strongly suggest using a blender as there was quite a lot of splash and clean-up to do. Run the machine until the horseradish it fairly fine (but not as fine as prepared horseradish). Pour it into a quart mason jar and fill with vodka. Leave it on the counter for a few days shaking the jar each time you pass through the room. Strain through a fine mesh strainer (like a tea strainer) and pour back into the bottle with the remaining vodka.

Be sure to really squeeze the grated root after you strain it.

Warn your guests before serving. Really. It’s a lovely milky white and oh so pungent.

The leftovers are going to make the best Bloody Marys!

What do you think?